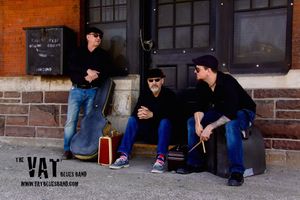 Hailing from Cambridge Ont. Canada - The VAT Blues Band was formed in July of 2014 with the three prospective members taking a turn towards a change from varying musical histories. The focus was and continues to be the love of the music. Members are, Hayward G. Vokey - Lead Vocals and Bass Guitar, Brian Alexander - Percussion and Keys, and Randy Trussler - Guitars and Vocals.

"Like a fine scotch, unfiltered and aged to perfection; The Blues only get better with time."

To understand this twist on 'The Blues' style is to understand where (and who) it comes from. From old to new and everywhere in between, The VAT Blues Band is: 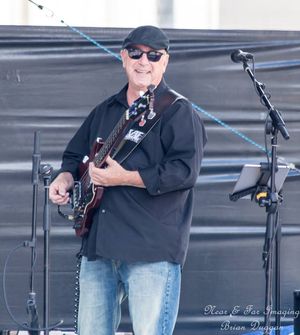 Whilst having lived in Cambridge, Ont. for 50 years now, the love of music was first impassioned onto me by the age of 7 in the energy driven kitchen parties of Newfoundland.

My teen years were filled with playing dances and events behind a set of drums and a microphone. By 19 I found myself joining the 'Del-Tones'  - a very popular band who were looking for a drummer. Along the way I learned to play guitar and soon joined a group called the The Hibbs (cousins of Harry).  We were brought in as entertainment for the first official Galt Newfoundland Club dance. I continued moonlighting with different bands while holding a full time job as a machinist at Easter Steel for 28 years. This job allowed me to start a hobby demo 8-track recording studio in my house along with giving beginner music lessons to local kids.I met up with David Rashed a song writer and former group member of Haywire out of PEI. David, (who was then living in Cambridge) and I played in group out of Woodstock Ont. called Terry & the PoorBoys. By now I learned to play bass.

David and I produced several demo CD’s with a few different local groups.  We were able to use a studio in Toronto which formally produced all of the K-Tel records to master our projects.  We did one concert at Copps Coliseum for 100 Huntley Street ministry; a 30 tune mostly original set of music for their event.

PoorBoys 2, myself and George Ivany - an original member of my very first group - joined back up together.  George and I wrote 10 tunes together.  We were approached by Randy Trussler (Guitarist for Heavy Lights) to record the PoorBoys 2 tunes as a demo CD. Randy and I quickly became friends and mutually decided to start a simple three piece blues band.  At Randy's suggestion, we approached Brian Alexander (who played drums with Heavy Lights) to join him and I.  After some rehearsal and a few times playing at a local bar we believe we have a good sound going for three pieces. With encouragement from friends and patrons of the bar, we intend to pursue our friendship and love of the music we founded  - Vokey - Alexander - Trussler….  VAT Blues Band. 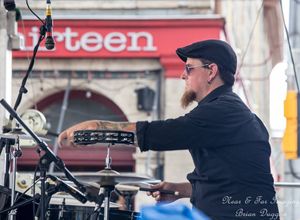 From as young as I can remember, the radio in my parent's kitchen was never turned off. Good Ol' Oldies 1090 was the soundtrack to my childhood. With Mother Dearest singing (and eventually directing) church choirs, I was around music all of the time.

Put into piano lessons at the age of eight, I began a long journey with music and interpretation. While I now have a greater appreciation for the classical music of my training, at the time it's lack of 'coolness' mixed with a constant ADD struggle made it hard to focus. By highschool I had a much different idea of what music was to me and where I wanted to take it.

I began collecting instruments and teaching myself how to play them - one thing I can most definitely thank my piano training for! I bought a third hand beat-up Westbury drumset from a friend at sixteen and released some teenage angst throughout my punk-rock years. I found that there are a million Eddie Van-Halen's out there, but very few Neil Peart's! Drummers are a hot commodity and so while I continued (and still do) to learn and play many instruments - percussion has become my flavour of choice.

With a vast array of musical influences crossing through so many genres, my drums and I have dabbled in many places and with many faces. My teen days and into the my early twenties saw a-lot of punk rock and metal projects, however the last number of years have been more leading towards jazz and blues inspired rock music and Canadiana stylings. Through a strange twist of fate, I found myself standing in for a gig with Heavy Lights. One gig turned into two years where we were fortunate enough to be part of a number of important events including, Placing Third overall in a province-wide band search competition; Fundraising efforts for local Cambridge teen Kayla Baker; The 2013 Cambridge Mayors Festival For The Arts; and headlining a large benefit concert in support of The Lisaard House of Cambridge.

During my time with Heavy Lights, I developed a kinship with guitarist Randy Trussler who inevitably approached me regarding a new project that would take it back to blues roots. After a few jam sessions, the VAT band was formed. 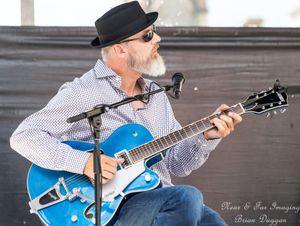 My first introduction to a hollow-bodied six-string was in my pre-teens. My uncle George took my interest and formed it into chords. The influence he had on me was amplified when I was 12 and he brought me to see 'The WHO'. The raw power and emotion resonating through me - coupled with the most amazing sound I have heard even to this day - hooked me!

Naturally, I took to the basement loaded with ambition and tons of rental gear. Two cousins, a close friend and I formed a band called 'Metaphor', pushing ourselves and growing with the music.

At 15, in order to continue to grow, I found local musician and teacher Barry Kirk. I remember standing dumbfounded at his doorstep listening through the door at him playing, It was incredible. He opened my eyes and introduced me to musical languages and theories that still have me returning to that door step more than 30 years later!

This continued through to my twenties - everything was music. I did some fun shows - including an opening gig for Glass Tiger at Galt Arena Gardens in the 90's. Nearing the end of the 90's, I began to integrate my music with my professional wood and toolmaking by building guitars for local Cambridge musicians. I still build now but predominately for personal use.

As all things come around, many years later 'Metaphor' re-united under the new name 'Heavy Lights'. We proudly wrote, recorded and released 2 full length albums and played countless events throughout the city and region. We were recognized for our community efforts with the Bernice Adams Award.

Though my musical journey has taken me here, there and everywhere, I have always taken to the traditions of the old blues and rockabilly icons of yesteryear. The formation of the VAT blues band has allowed me to take my unique style and create music that feels like home.